That gap, between pristine myth and overripe reality, is constantly on display in Stagdale’s pages. A double-sided spread of the town centre – see above for part of it – looks at first like the kind of rural Shangri-la that estate agents would haul each other viciously through any number of courts for the right to represent. And yet, there’s cracks and pot-holes on the bridge, and a shopping trolley in the river, and tiles missing from the roof of Stagdale Stores’ and, beside it, an ancient and now-derelict barn with a ruined roof. Stagdale may have missed the twin scourges of the Luftwaffe’s bombs and the worst excesses of post-war planners, but it’s hardly unscathed by the passage of time.

In the forefront of the frame, a scowling local strides ahead of a border collie who, if it isn’t a stray, is following him with a conspicuous lack of enthusiasm. Nothing here suggests a community bound in anything other than dissatisfaction. Even the conversation in the panel is about the constant, inescapable presence of bullies and the spirit-crushing obligation, even across generations of the same family, to constantly placate them. By a long way, it’s the least idealised of Castle’s depictions of Stagdale, with the alluring symbols of a supposedly better and lost Britain coexisting with the illusion-puncturing presence of life as it’s invariably lived.

There’s no melodrama in Castle’s storytelling, and most certainly no hysteria. In Stagdale’s single moment of violence, the incident is seen by Kathy through the diagonal muntins of an aged window. The brutality, distant and, accordingly, silent, is presented in a series of small and isolated freeze frames, as if Kathy’s shocked mind can only perceive the affray in a string of frozen and almost disconnected images. To the reader, it is as if each diamond pane of glass had preserved its own distinct point-of-view record of the repugnant event. The sequence, with Castle’s low-key and distancing approach, runs quite contrary to the given logic of action/adventure comics. In doing so, it focuses our attention on the inner life of the assault’s participants rather than upon the immediate and intense details of the confrontation. Violence in comics has, shall we say, an unfortunate habit of distracting from the emotional truth of the scene at hand. The studied dynamism of a thrown punch, captured in loving close-up and framed by motion-lines and impact stars, can entirely obscure the existence of everything but itself on the page. But here, it’s the mundane horror of events that captures our attention. Because of that, personal anguishes that might otherwise carry little weight – the loss of a pair of glasses, the theft of a bicycle – are made to count. As they surely ought to.

In the absence of the standard-issues fight-scene clichés, the suggestion also arises that the beating is an everyday, if appalling, event. For all that it’s distressing, to observe as well as suffer, the drubbing appears to be a matter of routine, a mindless and repetitive parade of casual malice and resigned discomfort. The boiler plate of four-colour slug-fights insists that every punch is a vital and world-turning event. And yet, what if it isn’t? What if every punch is, for all the pain and trauma that it might cause, part and parcel of everyday routine? What if all this is no more and no less than the way that things happen, day-in and day-out, in Stagdale, a repeated and commonplace infliction of humiliation and pain?

Perhaps Castle’s greatest achievement in Stagdale lies in her ability to sketch out how the threat of violence causes victims and potential victims alike to censor their own thoughts and feelings and actions. Far more disturbing than the sight of this punch being thrown or that tooth being subsequently dislodged is the way in which the dread of violence transforms Castle’s most powerless characters. Fear prevents Kathy from leaving her new countryside home. What if she might encounter the town’s bullies, with their apparently hereditary right to persecute whoever they want to? Fear prevents Joe from resisting the thugs who victimise him, and fear shapes the resignation that he adopts in order to cope with the absence of help or hope.

And that, there, is where the real horror of Stagdale lies. In the way in which we all, to this degree or that, become collaborators with our potential persecutors, hoping their gaze shifts elsewhere while we shuffle off to a safer, if never entirely safe, bolthole. 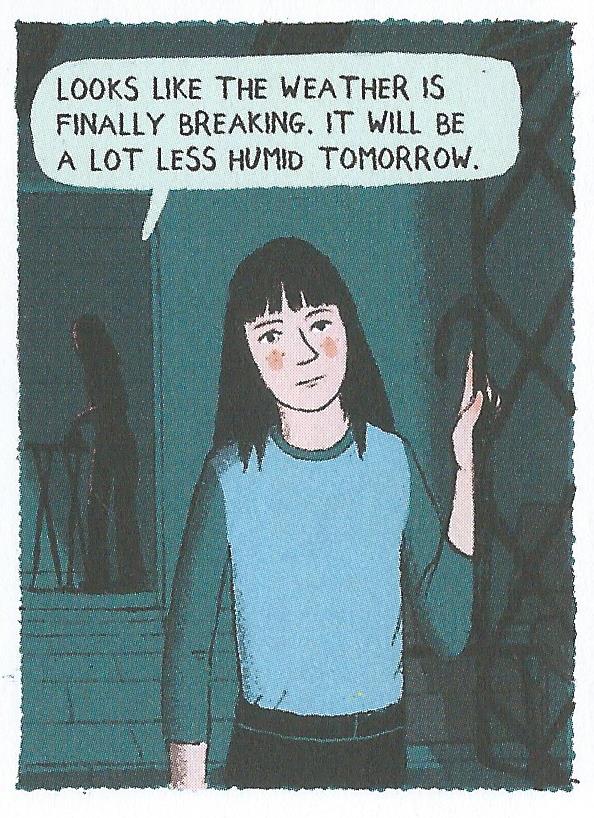 Yet, in closing, for fear of giving the wrong impression, it should be said there are also moments of considerable bravado and feeling in Stagdale. This is not a tale that’s glum or worthy or ponderous. To suggest that Castle’s first chapter is nothing more than a skilled and measured and rather muted exploration of character and setting would be to seriously under-state the comic’s virtues. Kathy and Joe’s visit to the town’s museum, for example, lends Castle the space to approach the scene as if it were a point-and-tell computer game. The richness of the information that’s on offer, even as the conversation between the two children continues uninterrupted, makes for an unexpected change of pace that’s an enjoyable experience in its own right. Most remarkable, however, is the sequence in which the commonplace routine of a Stagdale night appears to play host to an entirely unaccountable phenomena. The mercury falls, a storm gathers, lightning cuts through a late dusk-time sky, and something not immediately explainable appears to intrude into a disenchanted world. It is an entirely enchanting scene. Most beautiful of all is the manner in which Castle depicts the subtle effect of the wind as it runs before the squall and sets upon the contents of Kathy’s room. Not wishing to spoil the incident any further, I will simply add that Castle’s storytelling there is absolutely of the front rank. Not simply clear, purposeful and involving – as if those were merely pedestrian virtues in themselves – but memorably innovative too.

Roll on the second part of Stagdale.

You can find everything you need to know about acquiring a copy of “Stagdale” at Clay Pupe Music’s site here.