At first glance,  the very format of Stagdale Part 1 suggests a gently nostalgic read.  Although hardly commonplace in 2019, Stagdale‘s particular shape and size – roughly that of a medium-formatted paperback turned on its side – was frequently used in the post-war decades, and indeed right up until the Eighties, for illustration-heavy titles such as Puffin Picture Books, cartoon collections, Brooke Bond Tea card albums, the Eagle books of sport, and, amongst so many other examples, the BBC school booklets that accompanied educational radio and TV broadcasts. What, it might seem, could be more enticingly and comfortingly conservative, to those of a mind to be so enticed and comforted? Even the redemption coupon for the musical soundtrack to the book comes on a small slip of paper that, to this reader at least, evokes the bus tickets of bygone days. Are these come-hither, take-me-back signals for timesick refugees from yesterday’s lost land of content? Is Stagdale promising a consoling wallow in the scraps and shreds of supposedly better times?

The book’s front cover alone succeeds in conjuring, if only for a moment, that same sense of a still, beautiful and peaceful Britain to be found, say, in many of the great railway posters by the likes of Wilkinson and Kauffer, Newbould and Mason. So too are there suggestions of the air of calmly Arcadian paradises portrayed in Brian Cook’s book covers of the same period, in which even his urbanised subjects are remade to resemble aspects of an enticingly rustic and bountiful Albion. Emerging in recent decades into the limelight of record prices at auction and mass market reproductions, the work of such artists represent but the tiniest, if now the most visible, fraction of the pastoral-lauding fictions, visual or otherwise, that have long saturated our culture. Whether or not His feet did indeed walk in England’s pastures green, many of these seductively beautiful depictions of a British countrified Eden still possess the power to maintain that the nation’s fields would surely have been worthy of that Messiah’s presence. 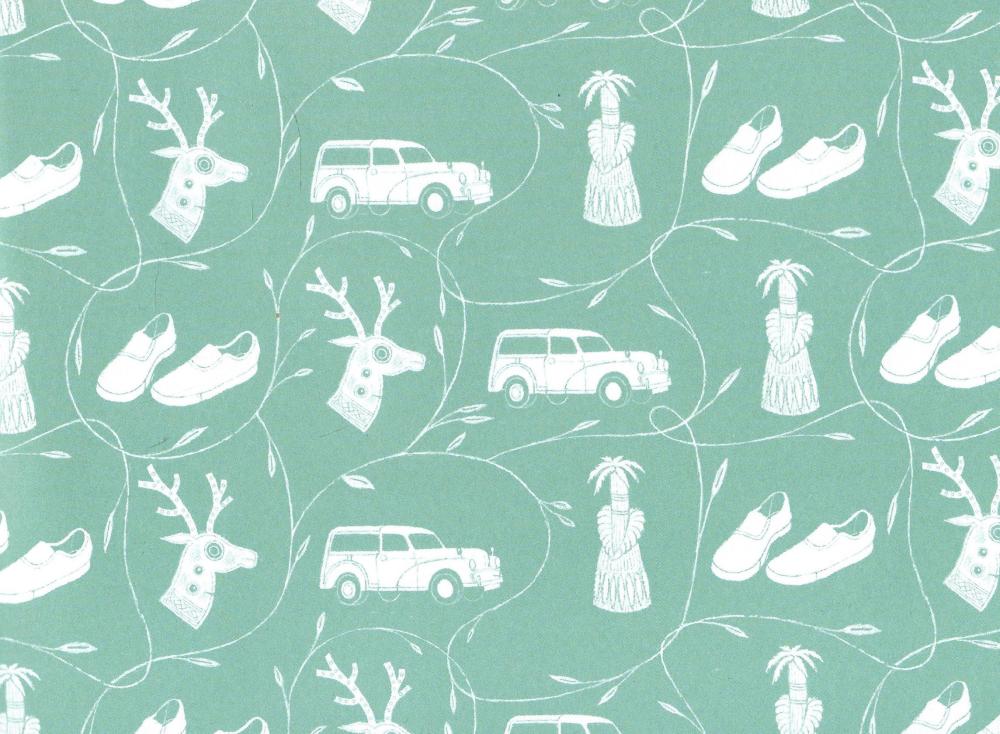 On closer inspection, the interiors of Stagdale draw on more gentle and less monumental nation-celebrating influences than might at first be expected. The suspicion that Castle might be playing the patriotically-charged card immediately dissipates. Instead, the scale of the work tends towards more intimate details, and that’s true even in the more widescreen shots of Stagdale and its surroundings. Castle’s interview with Arena Illustration reveals that she’s long been beguiled by illustrators and print-makers of the pre-Pop Culture 20th century, such as, to name but a few, Sasek and Bawden, along with more modern schools that draw off, in part at least, such influences. And Stagdale’s endpapers certainly suggest, to my admittedly untutored eye, a versed familiarity with the design traditions that Bawden is considered a master of. (The gathering respect over recent decades for once-largely ignored virtuosi of figurative storytelling, after the long post-war critical dominance of more abstract, conceptual work, is surely, surely cause for celebration.)  And so, to look again at Castle’s full-page front-cover landscape of a great chalk stag and a stone circle on the hills beyond Stagdale is to be, perhaps inescapably, reminded of Ravillious’ masterful watercolours of Sussex chalk paths and chalk figures. Yet, at the same time, Castle’s work never gives the impression of flatly homaging other work, being consistently intriguing, subtle and deliberate. If her storytelling refers in some part to her influences – and the work of which artist’s don’t? – it is also completely integrated into her own particular style of storytelling. And just as the art reveals itself to be something more individual than its apparent antecedents, so too are the ends that Castle puts it to.

To tilt at reactionary attitudes while using a style that’s fundamentally minor key – finely judged, but lacking the easy dramatic outs of more grandiose approaches – is, at the very least, a fascinatingly demanding approach. Yet it works to accentuate how the evils in play in Stagdale are, on the whole, the province of profoundly ordinary individuals rather than of cosmic forces beyond our comprehension. Castle’s is a world of carefully depicted everyday sins, and the forensic, low-pitched layering of detail and meaning in her storytelling never lets blame fall on anyone but everyday sinners.

Look again at that cover. Those same green-remembered hills are elsewhere in the book referred to as the reason why broadcast signals struggle, to say the least, to reach Stagdale. It’s a point made with care and restraint, and all the more powerful for it, with the reader trusted to stay awake and make the connections between the dialogue on one page and the pictorial evidence elsewhere; the ancient hills within which the village nestles are made to express an uneasy, smothering antiquity even as they block out modern-era communications from the modern world beyond. And if the comforting, mythical past of the English countryside does initially dominate the reader’s view, isn’t there also a subtle question about Kathy’s relationship to it being raised? Is she about to step out of the shadows into Arcadia, or does her presence in the shadows suggest a more sinister reality?

Perhaps the most impressive aspect of Castle’s cover is the way in which is achieves two quite contrary ends all at the same time. On the one hand, she seductively evokes the pastoral traditions of earlier times. Yet on the other, Castle also undermines the very traditions that she’s appearing to unambiguously celebrate. If her regard for the craft of the illustrators she’s drawing inspiration from is evident, and it really does appear to ben then she’s having no truck with any Little Englander associations that might be tethered to their work. In short, Stagdale’s covers, front and back, are full of awkward questions. Why would paradise need to be fenced off from the world beyond it, and with barbed wire yet? Why is the undeniable beauty of a summer pastoral scene also marked by the smoke issuing from several chimneys, as if the season hasn’t succeeding in warming the world as thoroughly as it should? It’s a process of portraying thesis and antithesis all at the same time, as in the presence of those two swifts, symbols of the ability to adapt to changing circumstances, rather of a servile fealty to never-changing customs.

And to turn the book over to its back cover is, tellingly, to encounter what appears a street of distinctly modern housing driving out in straight lines into the green from the town’s original twisty bounds. Is this paradise being ruined by 20th century innovation, or could it be it’s the modern era coming to the rescue of an old-line-or die hamlet? 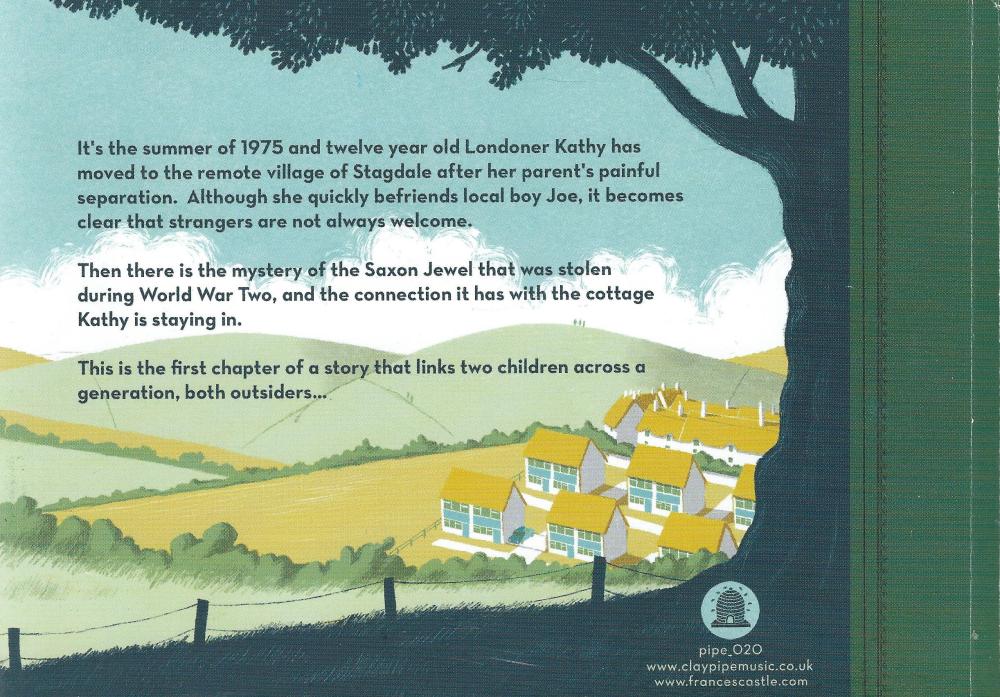 In the pages between the covers, and in the accompanying Stagdale EP as well, the canker in the apple tree is always lurking in plain sight, even if it’s not always placed over-obviously in the story’s forefront. Corruption, or at the very least the need for change, is, from the off, inseparable from the illusion of rural bless, mournfully present even when not openly malignant. It’s all the stuff of a long-established storytelling tradition, of course. The isolated village, the uninvited and unassimilatable guest, the apparently prehistorical monuments, the unyieldingly uber-conservative locals, and so on. But Castle has succeeded in making something elegantly individual and purposeful out of some superficially familiar components. In doing so, she’s taken the visual language that might today be expected to eulogise the uber-retrogressive myths of the nation’s past and put them to a mischievously contradictory use.

In Stagdale, there’s an immediate, if often subtle, insistence that the pipe dream of an English Arcadia – it’s so often English – has always, and quite obviously, been contradicted by the evidence of our senses, of our experience.

You can find everything you need to know about acquiring a copy of “Stagdale” at Clay Pupe Music’s site here.