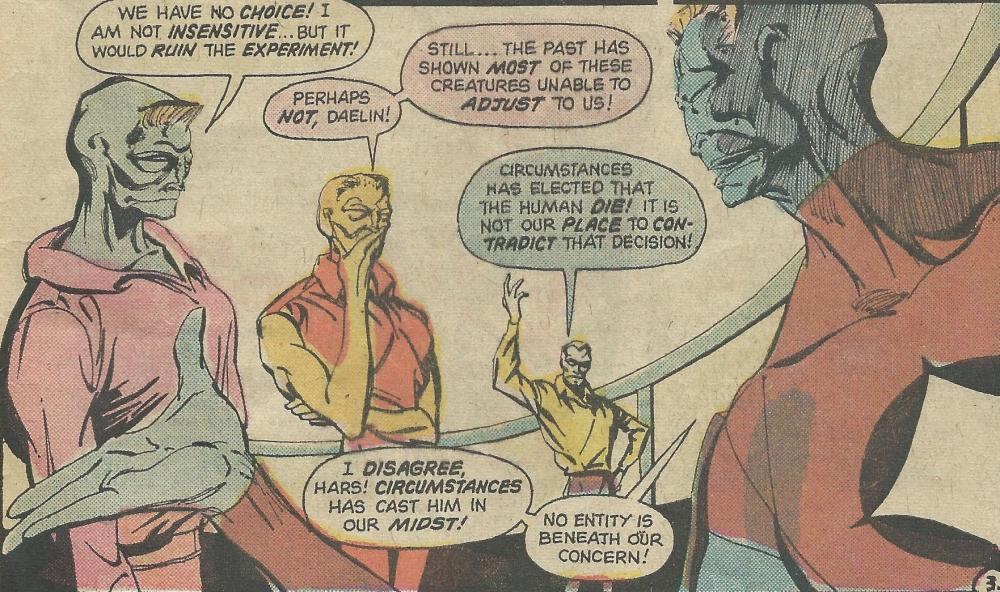 As I’ve been discussing in the past few blog posts, the Phoenix was a profoundly unimpressive comicbook, and the shortfalls in craft that caused that underachievement appear rooted in a lack of control when it came to the narrative traditions of the superhero genre. Yet none of that means that Phoenix couldn’t be an enjoyable, and even an entrancing, read. In the comments to yesterday’s post, for example, Lawrence Burton wrote that he’d enjoyed, as a lad,  both the comic’s “modular, kind of tidy storytelling” and its “aliens as clearly inspired by the flying saucer lore of the day”. I myself found something oddly appealling, if not decisively so, in the comic’s overwhelming air of bleakness. By this, I don’t mean to imply that a regard for Phoenix depends upon a youthful encounter with its pages. Rather, it is to say that although Phoenix was most certainly capable of inspiring individual readers, it wasn’t fit for purpose as a challenger in 1974’s superhero industry. For the book’s structural problems really did make it very hard for a commercial breakthrough of scale to occur. In one final look at these underlying problems, I thought I might discuss Phoenix’s alien antagonists.

Again, there are considerable problems with the fundamentals of storytelling when it comes to the villains of Phoenix. Just to take a single example, their species are unhelpfully only named once, and in a passing fashion, while they themselves are so very similar in appearance that telling one from the other makes for a considerable chore. They have the same saurian body types, the same physionomy, the same clothing styles rendered even more indistinguishable by a perchant for flatly pastel shades. That they’re lent what are presumably forenames such as Garin, Neia, Nerei and Hars helps not at all, given that their characters are so interchangaeble. Only one basic individual difference exists to guide the baffled reader: Nerei, who wears the same costume that Phoenix later adopts, believes that Ed Tyler, stranded in the Arctic, shouldn’t be allowed to die. His colleagues disagree. Yet even there, the distance between Nerei’s behaviour and that of his extra-terrestial fellows is slight. Indeed, Nerei proves himself to be, beyond a high-minded regard for the sanctity of life, an arrogant and cruel bully. In a science-fiction novel, all of these problems could be quite easily dealt with. But in a comicbook aimed at a youthful audience of superhero fans, this enforced inability to identify race, individuals and key character differences makes for an unhelpfully confusing and deflating experience.

What lessons might have been taken from the DC Comics Silver Age tradition about antagonists to superheroes? In the branch of superhero tales which rely, as Phoenix did,  upon plot, charm and political conformity rather than social conflict, individual neurosis and humanist issues, the demands of novelty and spectacle need to be paramount. It feels too obvious to even have to state, but the antagonists in such a tale have to be memorable and compelling. They always do, of course, but the need for a story’s villains to shine is especially intense when it is plot and not character that’s driving events. In a more traditional superhero tale, the antagonist/s are at the very least as important as the strip-headling star. Of course they are. It’s they who bring the conflict, the drama, the essential sense of difference and distinctiveness. While the superhero in a tale not driven by personality and personal conflict remains essentially the same, and therefore threatens to be a repititive and even tedious presence, the antagonists serve as bursts of a much-needed variety.

No-one at DC Comics during the Silver Age could match John Broome and Carmine Infantino’s achievements in the pages of the Flash when it came to creating villains who contributed that vital difference and excitement. (See above.) For the various members of Flash’s Rogues gallery were immediately recognisable, rich in ingenious abilities and, typically, entirely distinct from each one another. Their’s was an example to emulate.

None of which is to say that Phoenix should have been populated with bizarre super-threatening adversaries. But to people Phoenix: The Man Of Tomorrow with the exact opposite of Flash’s tag-team of menacing opponents was surely a foolhardy choice. Ed Tyler’s alien opponents aren’t individuals so much as largely interchangable representatives of a single type. Their society is, apparently, a culture without stratification, let alone rank. Everyone we’re shown does the same task in the same places. Who can be intrigued by an oh-so-familiar cadre of identi-kit alien scientists who live and die in identical hi-tech labs and conference rooms? What reader would ever feel driven to imagine exploring this sterile, shallow and predictable off-Earth civilisation? There are no enigmas of any power to engage with, no compelling mysteries or deliberately-crafted and intriguing logic-gaps to inspire What-Ifs on the reader’s part. The sense that’s established is of a static and unambigious cadre of opponents who will never offer anything more than they already do.

Who could possibly be excited, or even intrigued, should they learn that the bad guys of Phoenix’s debut issue were returning?

Just as a point of comparison, the first appearance of the extra-dimensional Weaponers Of Qward in 1960’s Green Lantern #2, by Broome, Kane and Giella, sketches out an alien society marked by fascinating difference and disagreement. In just 13 pages, we’re introduced to the powers-that-be on Qward, their armed guards and Thunderbolt Destroyer enforcers, as well as to the honest-John underground that opposes their authoritarian rule. As a portrait of another culture, it admitedly isn’t sophisticated in a self-conscious and precious fashion – how could it be, given so few pages and a marketplace of young boys to ensnare? – but it is both ingeniously varied and yet distinctly identifiable too. TheWeaponers as a whole are balding with bug eyes, with rank clearly signed up by dress and weaponry. Particularly in the lightning bolt-wielding Thunderbolt Destroyers, Broome and Kane lent Green Lantern a unique, threatening and exciting threat. What’s more, in the tale’s brilliant closing scene, we’re told that the Qwardian nation is attempting to challenge The Guardians Of The Universe through the theft of Green Lantern power batteries. Revealed in just four panels, it’s a plot-twist that places the Weaponers into the broader context of Green Lantern’s then-nascent mythos while elevating this previously-unseen threat to the level of an existential menace.

Who wouldn’t want to learn that the Weaponers of Qward were returning?

And that, there, is why tradition is so important. It reveals narrative structures that can be put to work, whether literally or perversely, while it sketches out a whole series of storytelling options that can be appropriated and adapted. But without such control of form and content, the result can be entirely confused and confusing, which is exactly what happened with Phoenix: The Man Of Tomorrow #1.

This look at Phoenix will be concluded tomorrow, with a brief look at how the example of the Marvel Revolution might have been used to lift the comic out of the mire. And after that, save me, it’ll be the turn of Atlas’ sole humour title, Vicki.