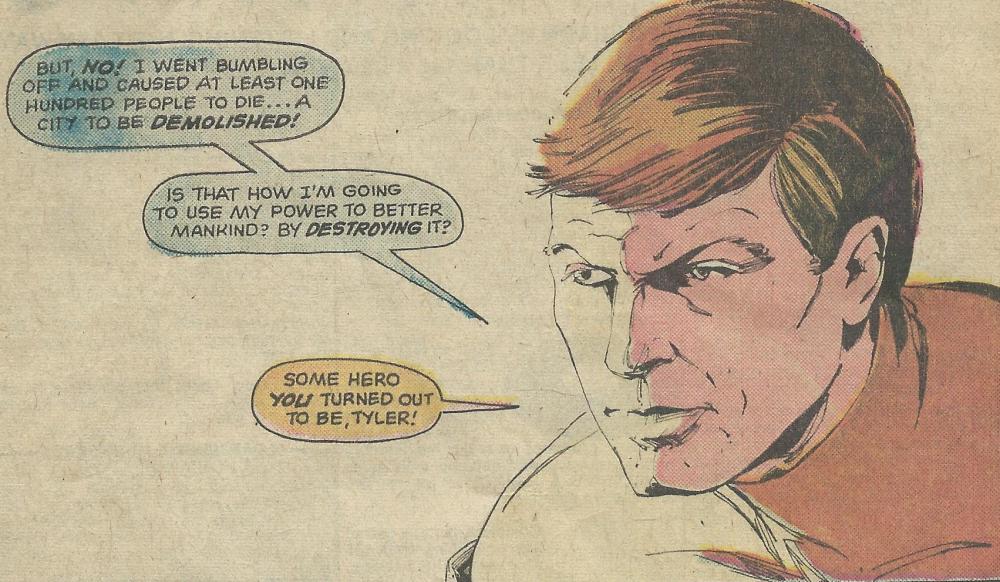 continued from here, where the problematical relationship of The Phoenix with the storytelling tradition established by DC Silver-Age superbooks was discussed;

Despite being in so many way an archetypal, if poorly executed, DC Silver-Age Sci-Fi superhero series, Phoenix came complete with what appears to have been a facile Marvelesque makeover. And so, where the likes of Flash and Green Lantern inhabited a fundamentally just, if unthreateningly absurd, universe, Phoenix was placed in a world of unremitting consternation and misery. In short, the purpleness of the emotional content in Phoenix had been turned all the way up to 11. Where Hal Jordan, Adam Strange and Barry Allen were good natured, optimistic and rational, Ed ‘Phoenix’ Tyler was humourless, vainglorious and dangerously impulsive. All of these qualities could have made for fascinating twists on a 15 year old formula. Yet the storytelling in Phoenix #1 shows no sign that the book’s creators understood that they were shrilly depicting a deeply unlikeable and tiresome character. Instead, the story precedes on the assumption that a charmless surface matched with a frequently exposed bundle of anger, pride and angst will satisfy the reader’s desire for a compelling heroic lead.

The overwhelming impression is of a creative team attempting to follow in the more realistic – if never ‘realistic’ – tradition of super-people as developed by Lee, Kirby and Ditko. In an apparent attempt to mimic the heritage of the Marvel Revolution, Tyler was lent a series of intense despairs and frustrations. But because none of them were integrated into the story at hand, none of them convince. Tyler has a wife, but the two of them are never given a single frame to share. When the astronaut decides to himself, in a single panel, that he must abandon all contact with his spouse in order to protect her from alien invaders, the decision carries no emotional weight at all. Despite Tyler’s spitting out a despairing cry of “Crap!” at his own decision to isolate himself, the angst is entirely unearned. (*1) Because we never see the conflict between Tyler’s desires and choices being played out, because we never see he and his wife struggling to resolve the problem, the situation remains entirely unaffecting. What could have been, and most probably should have been, the spine of any successful Phoenix series, became instead a peripheral concern.

Instead, the stage is mostly given over to unimaginatively-staged bouts of shouting and explosions. That the figure of the superhero tends to flourish best when personal emotional conflicts are predominant has always proven baffling to those who haven’t carefully studied the genre’s progress. It wasn’t a truth that should have ever been surprising. Even in Superman’s debut in 1938’s Action Comics #1, the personal interactions along with the broader social contexts deliver a great deal of the strip’s charm. Despite what the genre’s critics declare, and indeed what its least insightful creators practise, physical conflict and special effects aren’t the tradition’s most fundamental components at all. Oddly enough, the most tenderly universal of emotions are.

*1:- The Comics Code Authority certainly did lend Atlas titles a considerable degree of leeway, although editor Jeff Rovin did state that he believed the opposite. 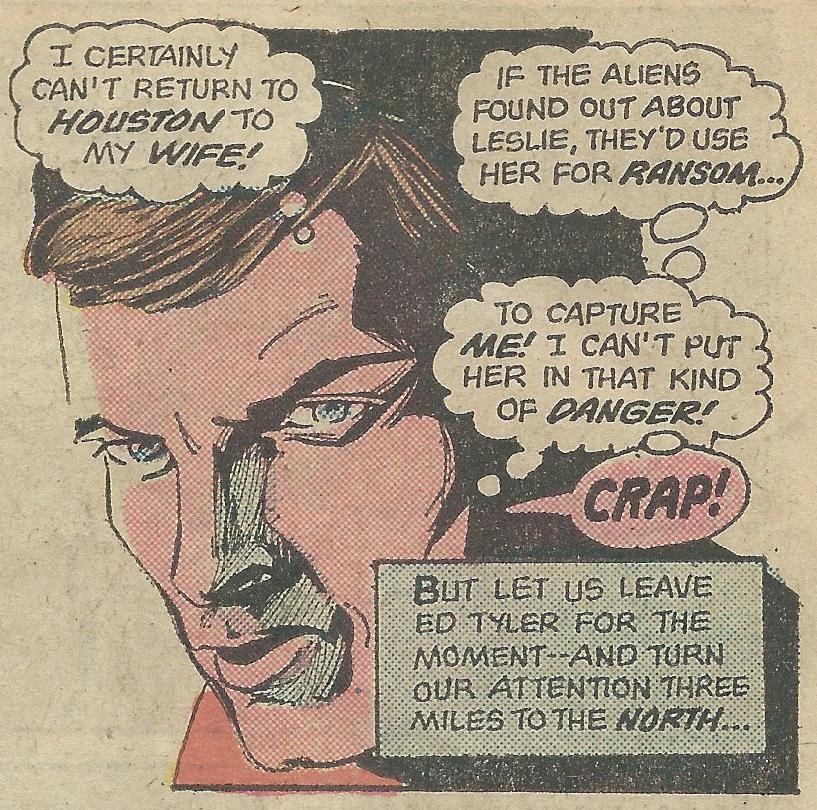 The choice, unconscious or not, to refer to without dramatising the enforced marital separation of the Tylers is a fatal one. It only draws even more attention to the key narrative components that were missing in the book. To make a bad choice even worse, the script at that point – see above – relies upon making its heroic lead an intellectual as well as an emotional idiot. For Tyler has already learned that his alien persecutors can, and have, read his mind. That they failed to encounter the existence of his wife is impossible to believe. So surely his only option is to race to her side and attempt to provide for the pair of them? Yet one more vital lesson that ought to have learned from Phoenix’s Silver Age DC predecessors is made evident here: ingenious, SF-lite stories flourish when they’re built around ingenious, science-minded heroes. To that, it might be said that there’s surely a place for an idiot at the centre of an otherwise predictable tale of evil aliens and plucky human resistance. So it might be. There’s plenty of ways that that formulation can be played with, but to do so requires it to be first recognised as such on one level or another. (In the Guardians Of The Galaxy movies, for example, Starlord is winningly both an idiot and more than capable with alien high-tech.) Yet Phoenix was clearly meant to be seen as the exact opposite of a fool, and so, once again, this wasn’t an example of rules being purposefully ignored so much as lessons never having been learned in the first place.

Or to put it another way: if you want your hero to seem admirably smart, don’t show him being so inexcusably dumb that all sense of believability evaporates. At the very least, mask that dumbness, if the story should carelessly rely upon it, with misdirection of one kind or another. As far as misdirection goes, an excess of angst is rarely effective.

At Marvel, angst was, at its most effective, rooted in a simple, if endlessly adaptable, narrative formula: obliged to serve the common good, the protagonist cannot fulfil their personal desires. And so, the demands of Peter Parker’s love life are forever being sabotaged by Spider-Man’s reluctant acceptance that, yes, great power brings great responsibility. At its least convincing, as with the Daredevil of the 60s and most of the 70s, the formula could be set into motion by lending a hero the fear of their secret identity being exposed. (It’s a repetitive set-up that soon wears thin, and even the addition of an extreme alter-ego like Mike Murdoch can’t alleviate its enervating consequences.) At its most effective, as with The Thing, the conflict between the greater good and the individual’s needs could power years worth of plots and sub-plots. (Interestingly, in the case of Ben Grimm, such was the life-changing extent and nature of the transformation worked by cosmic rays that the readership took it for granted that he should be allowed to give up his powers and return to a typical private life. It is a mark of the formula’s strength that it could drive both narratives in which, as with Spider-Man, duty comes first, and, as with The Thing, where individual preference is paramount.) (*2)

But with Ed ‘Phoenix’ Tyler, we know hardly anything at all of his life, personal orprofessional, before his transformation into a superhero. Nor are we given much idea of how his future will play out. It is quite impossible, therefore, to work out with any measure of insight and feeling what the conflicts might be between his new role and the ones which came before. (Indeed, the comic strongly suggests that Phoneix will cut all ties with the world he previously inhabited.) What was the reader to expect of the issues to come then? The prospect was for a great deal more angst without the humanising drama created by the playing out of the clash between old and new situations, between personal choice and social responsibility.

And the truth is, there is little that’s less interesting than an excess of unearned angst.

*2:- Of course, seen from decades later, the depiction of Ben Grimm as a victim, no matter how brave and persevering, who is absolutely desperate to throw off his disability is a controversial one. And I wrote in reference to that a few years ago, here. I don’t mean by the above to suggest that Grimm ought to be shown as being in considerable measure defined by what he’s shown to understand as his own victimhood. I merely mean to point out that that aspect of the Marvel formula – of individual choice vs social duty – was remarkably flexible, and could, in that time, be used to drive stories in which duty both should and shouldn’t be held to.The morality of those stories is a quite different matter.

to be continued tomorrow, with one last look, for now, at Phoenix: Man Of Tomorrow, and in particular, the book’s cast of villains…