I’ll be far away in the capital city today, undergoing trial by drill and needle and jaw-clamp in a London dental teaching hospital. Which means that today’s entry in the 31 Days Of Atlas series will be something, as the TV chefs say, I knocked up earlier. A change of pace, if you will. A diversion from a diversion.

One of the weakest aspects of Atlas Comics was the company’s covers, which often, if not always, appeared to be thrown together by somebody with very little idea of how to appeal to either the casual or the committed comics fans. In truth, most of the publisher’s covers were laughably poor, with the work of some very fine artists emerging at times as underwhelming, if not worse. I can only assume that a fatal mix of the absence of a top-notch design professional on staff, poor fees and tight deadlines was to blame.

Still, here are my favourite 5 Atlas/Seaboard covers, in reverse order, with a few words on each. 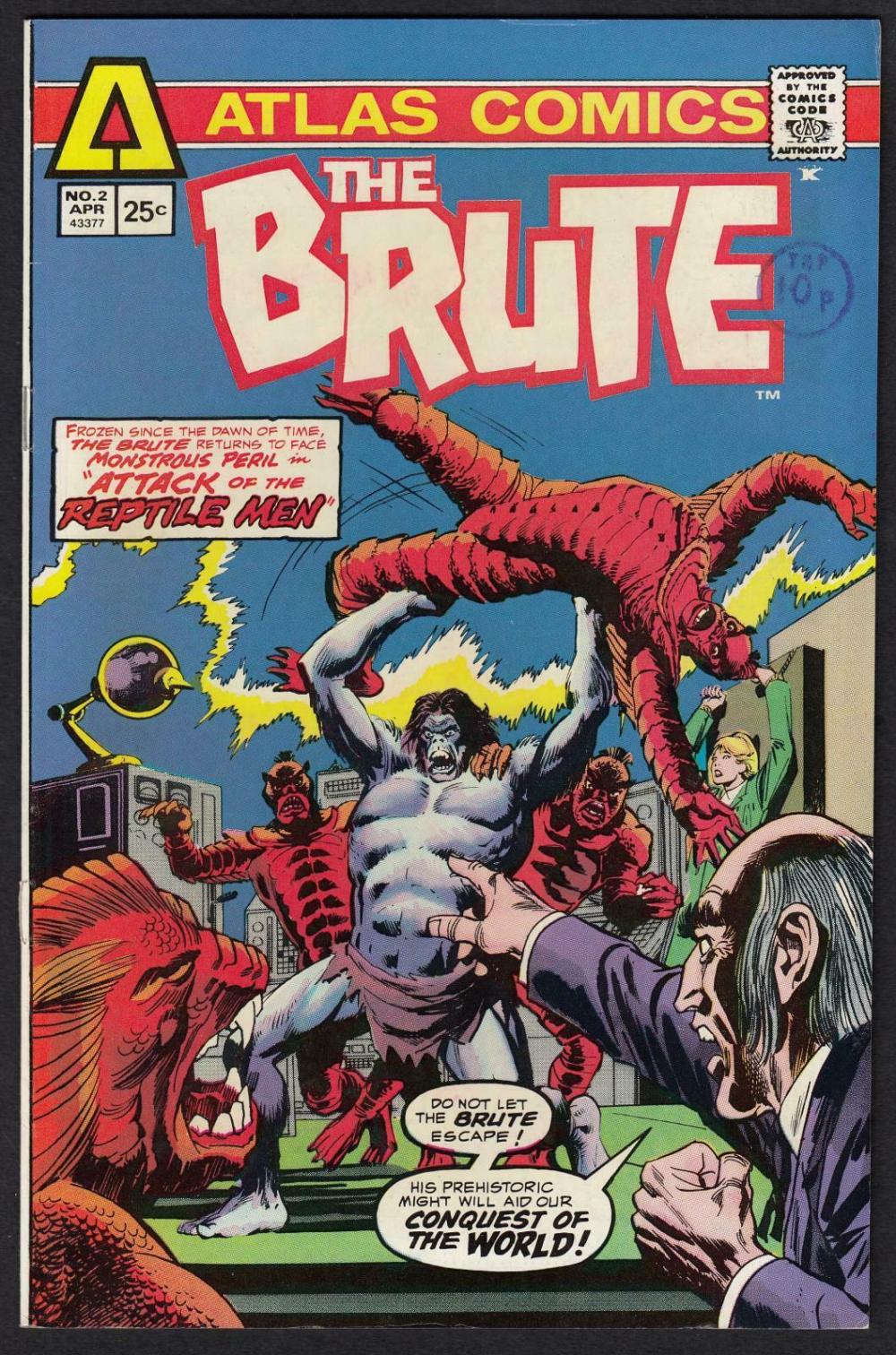 5. The Brute #5, by Dick Giordano, with retouches by Larry Leiber and Frank Giacoia.

Sometimes it’s the ineptitude of execution that makes me fond of an otherwise difficult-to-love cover. Here, Dick Giordano’s typically polished artwork appears not to have had the rough-hewn hysteria that Atlas were looking for. The solution, according to the data at the splendid GCD, was to add the orange-hided monster and the balding mad scientist to the forefront of Giordano’s artwork. (*1) At least the most human-looking of the two additions appears to have something of Giordano’s style about him. Indeed, I wouldn’t have questioned it as an example of his work. But the monster to front-and-left is so obviously a sub-Kirby appropriation by Leiber, with little if any attempt having been made to appropriate Giordano’s approach, that it screams a rushed reworking. And as if that all didn’t make for a jarring enough presence, there’s those thick black horizontal lines at the foot of the cover, which make it look as if something is being deliberately covered up. Could they possibly have been an attempt to suggest a view-screen of some sort? If so, why not add something of the rest of the frame?

Despite this, the elegance of what we can see of Giordano’s original cover is effective enough. A deliberate knock-off of The Hulk like The Brute, in all its bottom-feeding crassness, really wasn’t the ideal showcase for the classical tastefulness of Giordano’s art. But as a symbol of how Atlas was, in nearly everything it did, a mess of mixed intentions and misfiring ambitions, the cover to The Brute #2 is a rather enjoyable, and indeed representative, shambles. You can sense the promise and enjoy aspects of the skill on display, but, in the end, it’s all abit of a mess.

*1 – As I mentioned on yesterday’s blog, it wouldn’t be the only substantially reworked Giordano cover for Atlas either. Little wonder that he seems to have swiftly walked away from the company. 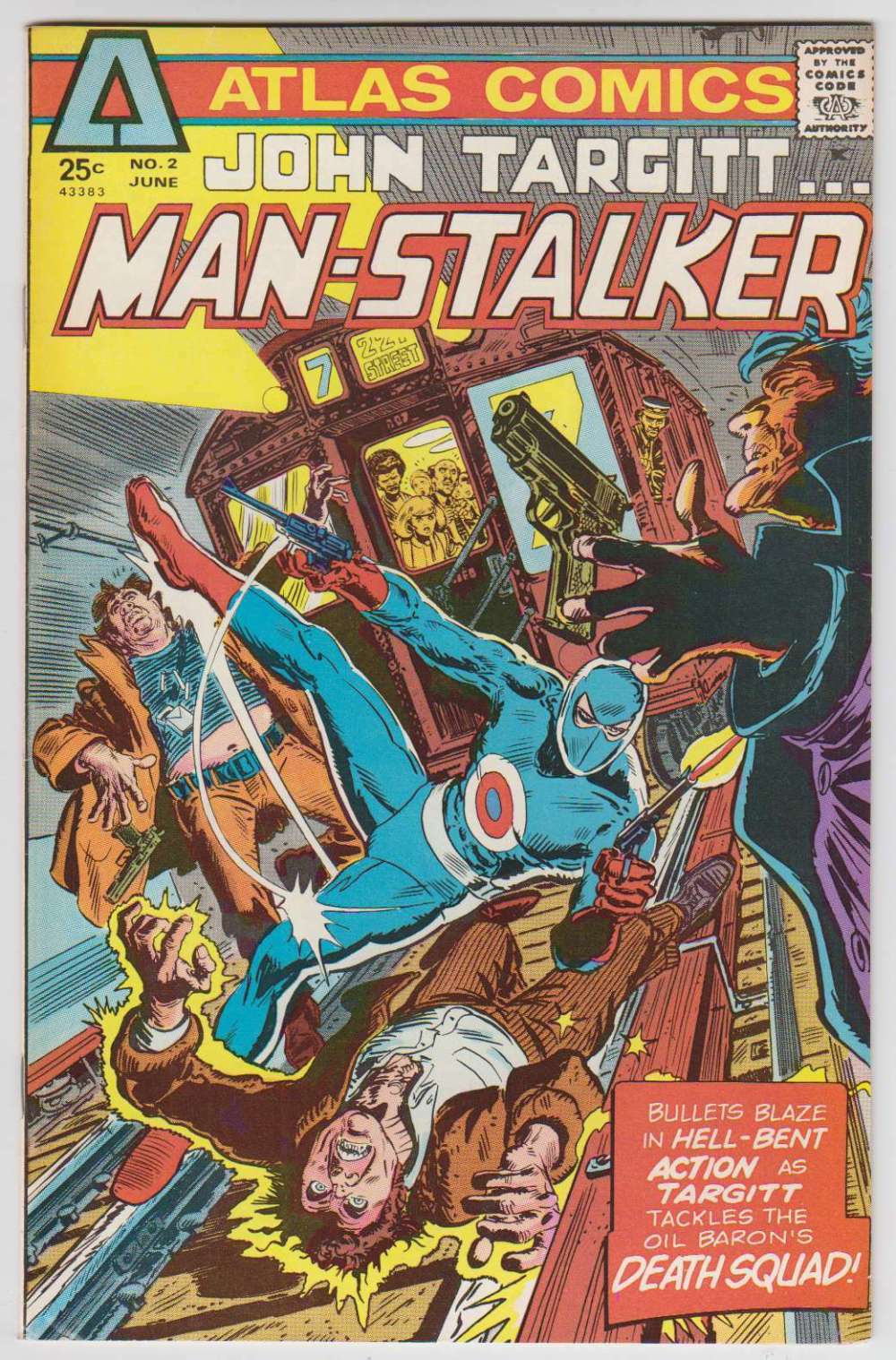 I wouldn’t ever feel confident in arguing that this was a particularly good cover. In truth, my conviction would be better grounded in the opposite argument. But given how banal Atlas’ covers generally are, Thorne’s work here does at least express a determination to hurl at the reader as many simultaeously-occuring, eye-catching events as possible. It’s not enough that the cover’s subject is a punch up: it has to be a punch-up on the tracks of a city’s subway! And then, why, we have to have a train too, and not just its broad outlines, but the details of several of its passengers and a guard as well. Of course, there’s also a fiendish criminal, or so he appears, being electrocuted on the third rail, because how can it be a subway bundle without it, and, best yet, that suffering appears to be the deliberate result of Targitt assaulting him with a pistol’s muzzle. But wait! That’s not nearly enough either! For Targitt is also shown shooting dead another presumed hood to the right of the cover, while also – because more is always more – kicking an obese oponent trainwards.

And then there’s that tough-guy, hardest-of-hardboiled copy too: “Bullets Blaze In Hell-Bent Action As Targitt tackles The Oil-Baron’s Death Squad!!”

Extra points could quite fairly be awarded for the topicality of the mention of a villianous Oil-Baron, 1974 being the year of the Oil Crisis. But, sadly, points could also be deducted for the sole exclamation mark on show. If you’re going to commit, then you have to really commit!!!!!!

In truth, it’s a messy, unfocused illustration in which there’s far too much going on and far too little made of the situation as a whole. The whole really is less than the sum of its parts. But you can see a kind of joy – or is it desperation? – at work here, and that at least transmits a degree of intent that’s so often missing elsewhere from Atlas’ covers. 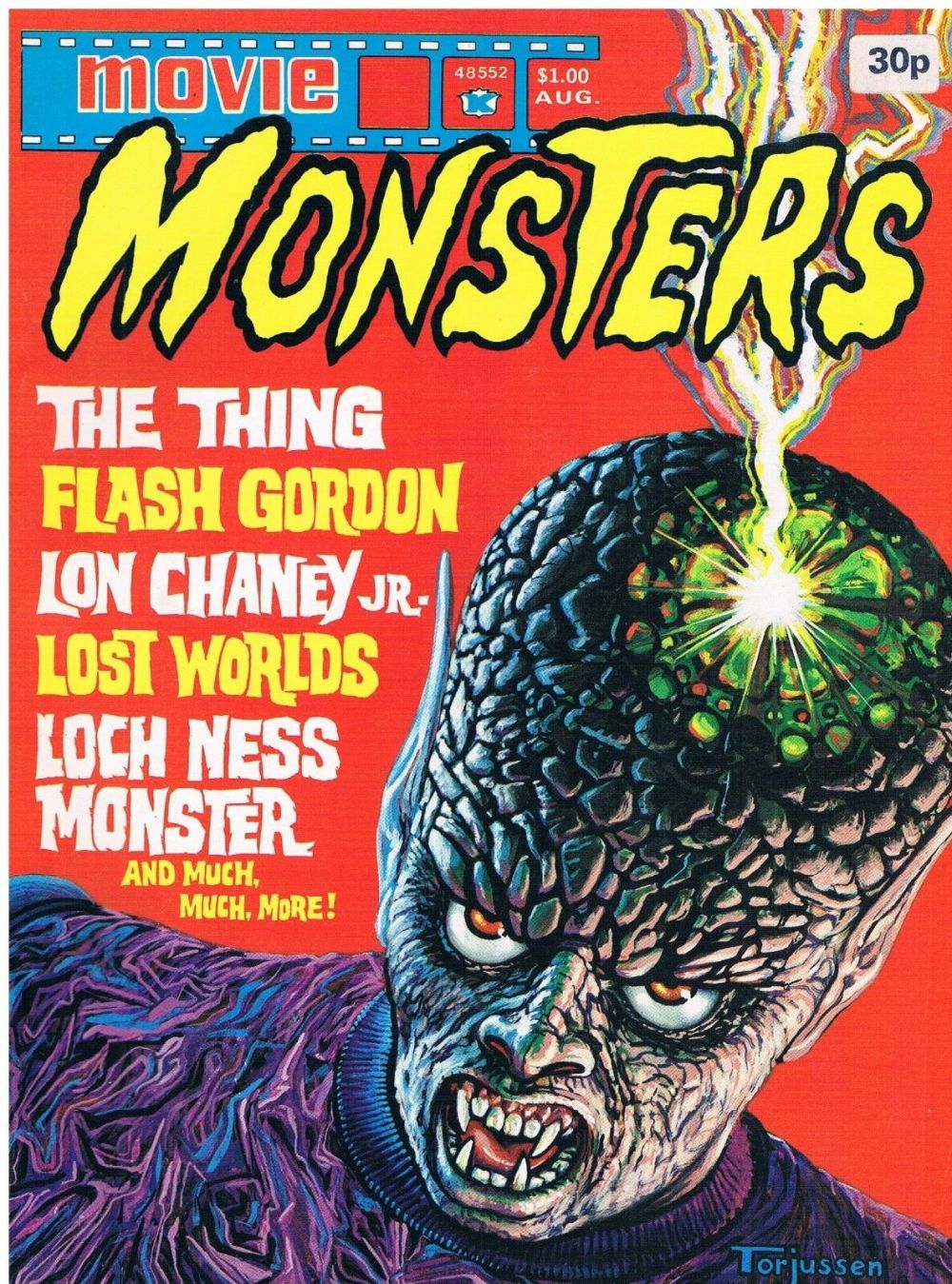 I wouldn’t make any great claims for this Torjussen cover, and any comics company which had an example as work-a-day as this in the rankings for its very best cover would, you’d suspect, never have survived for very long. And so it was. Still, Torjussen’s work here is at least bright, lurid, focused and eventful.

Whatever that glowing hole in the creature’s head is, and I fear I can’t identify who the cover’s subject is, it seems awkwardly placed to the left of its skull, as if his entire cranium was sliding to the one side. The emerging mental bolt, or whatever it might be, does however add an exciting kaledescope of colour against the cover’s bright red background, and particularly so at the top of the page. And if the mysterious purple material that clothes the creature makes absolutely no sense at all to the casual reader, the impression of liquidity that it conveys is again colourful and beguiling. All-in-all, Torjussen’s art here has many of the virtues of the best of fan art. The feeling and enthusiasm shine through, even when the technique seems somewhat wayward. That his painting can still demand the eye’s attention when the cover’s left-hand side is weighted down with all that copy is a mark of Torjussen’s effectiveness, if not any more virtuosic qualities. 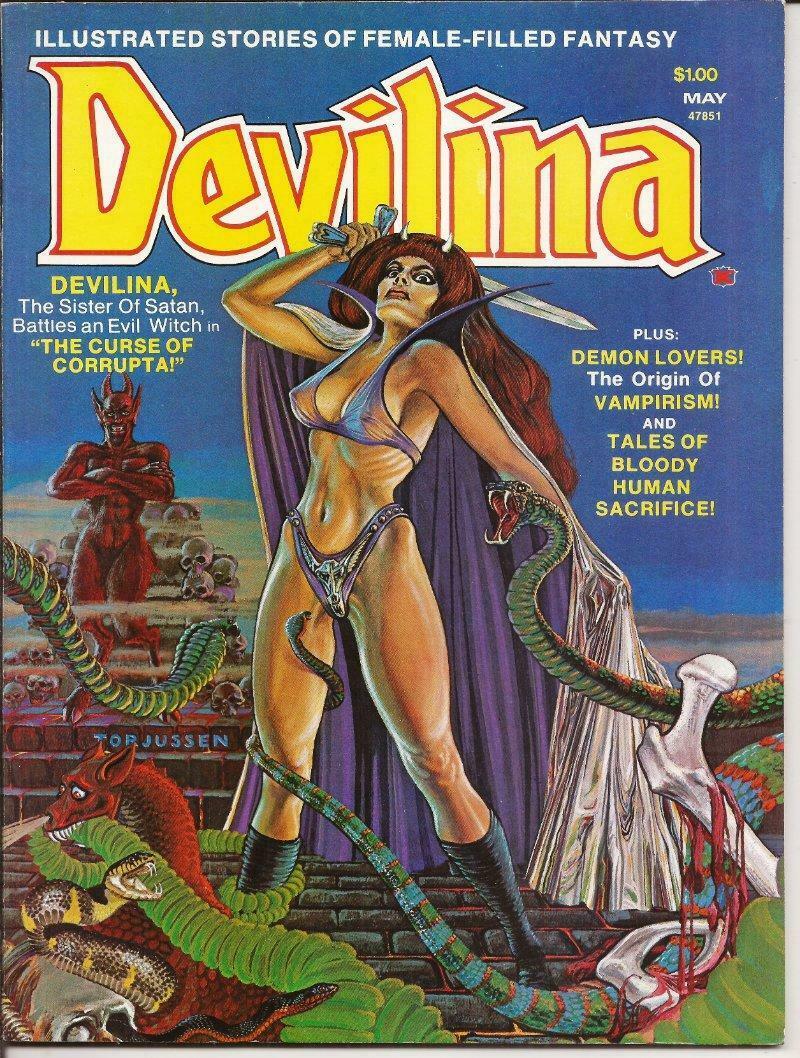 Another Torjussen cover, although, as a mark of his versility, it’s far more of a pleasingly still and flat cartoon than we saw on the front of Movie Monsters #4. It’s exploitation cheesecake, of course, but at least the figure of Devilina dominates the cover with a sense of weight and intention. Trash, undeniably, with a suspicion and more of a fetish for dramatically protrubing ribs and hip bones, but, compared to most of Atlas’ covers, trash that at least transmits a sense of conviction to those predisposed to horror-flecked titilation. This, Torjussen’s artwork promises the reader, is exactly what awaits inside. Nothing more and nothing less. During the period, horror comics magazines were nearly always a haphazard selection of mostly third and fourth rate stories. (Where outstanding tales were present, they were very rarely in the majority.) This cover gave its emphatic assurance that something other than the usual disappointments lurked behind it. It was a lie, mind you: the pages of Devilina were always seriously underwhelming. But at least any reader who did buy into the con got to walk away with this wonderfully silly cover.

It is the peripherial details and unexplained relationships that are, for all the absence of logic, engaging here. Who is that rather cute demon to the bottom-right, and what is he exhaling out through his nose, and why is he chomping on that green tendrill, and what is that green tendrill that’s wrapping itself around Devilina’s right leg. If Devilina is the Devil’s niece and sworn enemy, then why does she appear to be standing in his service? Does Devilina not know he’s there? Have they been reconciled? And so on, and on.

In a wonderful splash of camp, the figure of Satan in the background looks laughably fiendish, captured with no convincing sense of authority as if he’s performing the Kazatsky. In itself, it’s a delight of daftness, and well worth the otherwise exorbitant sum of $1 that Atlas imagined rube readers might stump up for this desperately poor magazine. 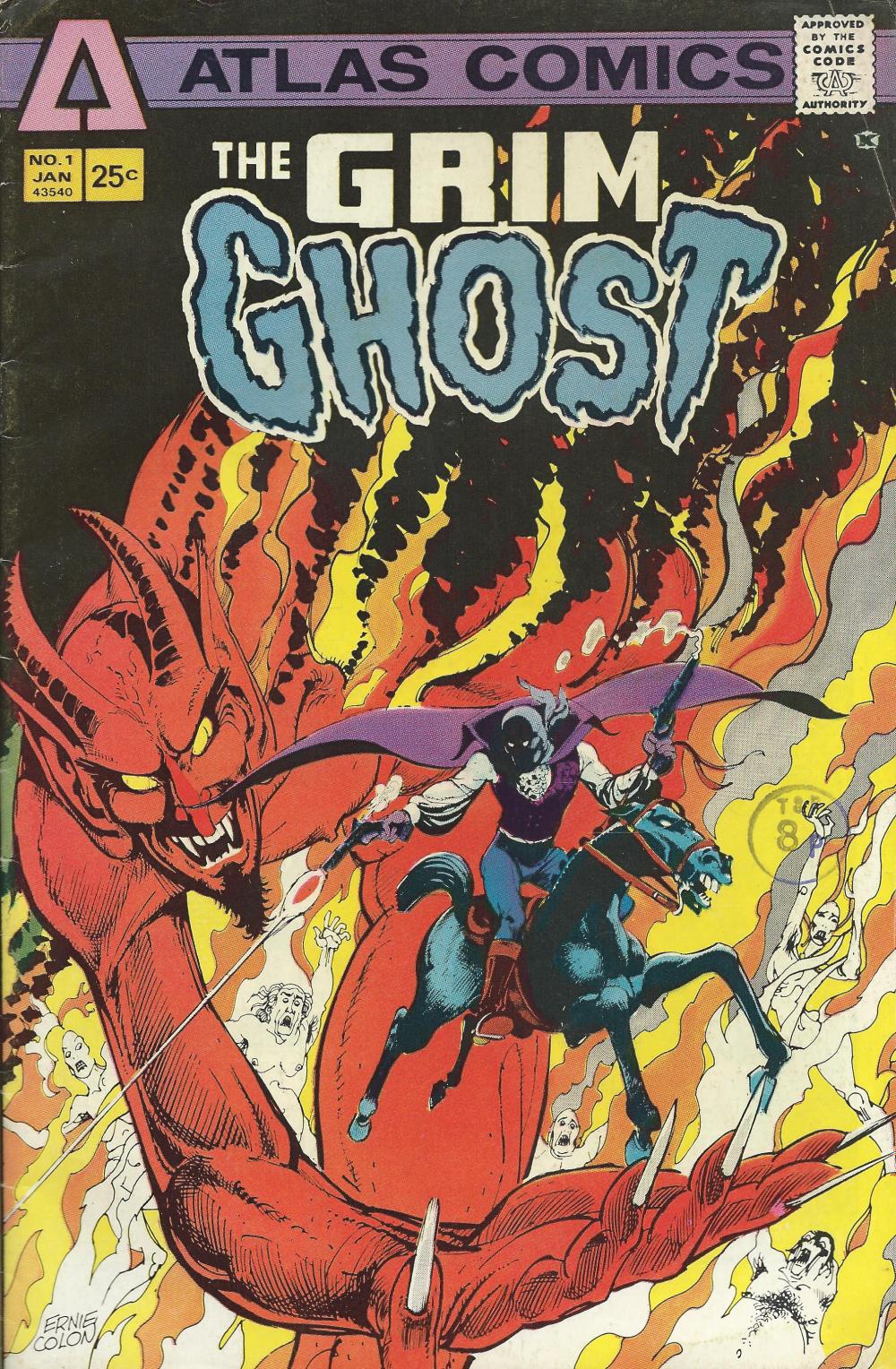 Even the best of Atlas’ covers had significant problems. Just look at the dead space of black at the top-left of this otherwise eye-catching art from Colon, left, as it is, exactly where the reader would most likely begin to scan the cover. Still, the figure of The Devil is undeniably intriguining, or at least, he is until the reader tries to make out the relationship between his arm and his leg. At which point the logic of the scene threatens to collapse, since a cover that demands concentration in order to make sense of it is unlikely to be a pocket-emptyingly compelling one. Still, flames, suffering souls and the sight of the Ghost’s trusty steed apparently racing along the Devil’s dramatically extended forearm and palm makes for an arresting image. Indeed, the cover stands as the best single shot of either Satan, the Grim Ghost or his flying horse to be found anywhere during Atlas’ brief lifespan.

Perhaps best of all is the sheer, and surely appropriate, deceitfullness of it. For although the cover suggests that the Devil is here pursuing The Grim Ghost, and that the latter is firing his pistols at Satan with desperate intent, the contents of the issue insists otherwise. For this is surely Satan freeing The Grim Ghost, and those pistols are being fired not at The Devil, but at the kinds of “evil” criminals who will soon be being roasted in the furnace of Hell.

It was always going to be a set-up that was hard to sell, and this misdirecting cover suggests that Atlas knew that right away from the off. What were they going to do? Sell the comic on the novelty of The Grim Ghost being an unrepentantly murderous psychopath in the ready service of Satan? If nothing else, that would have made for a fascinating marketing campaign.