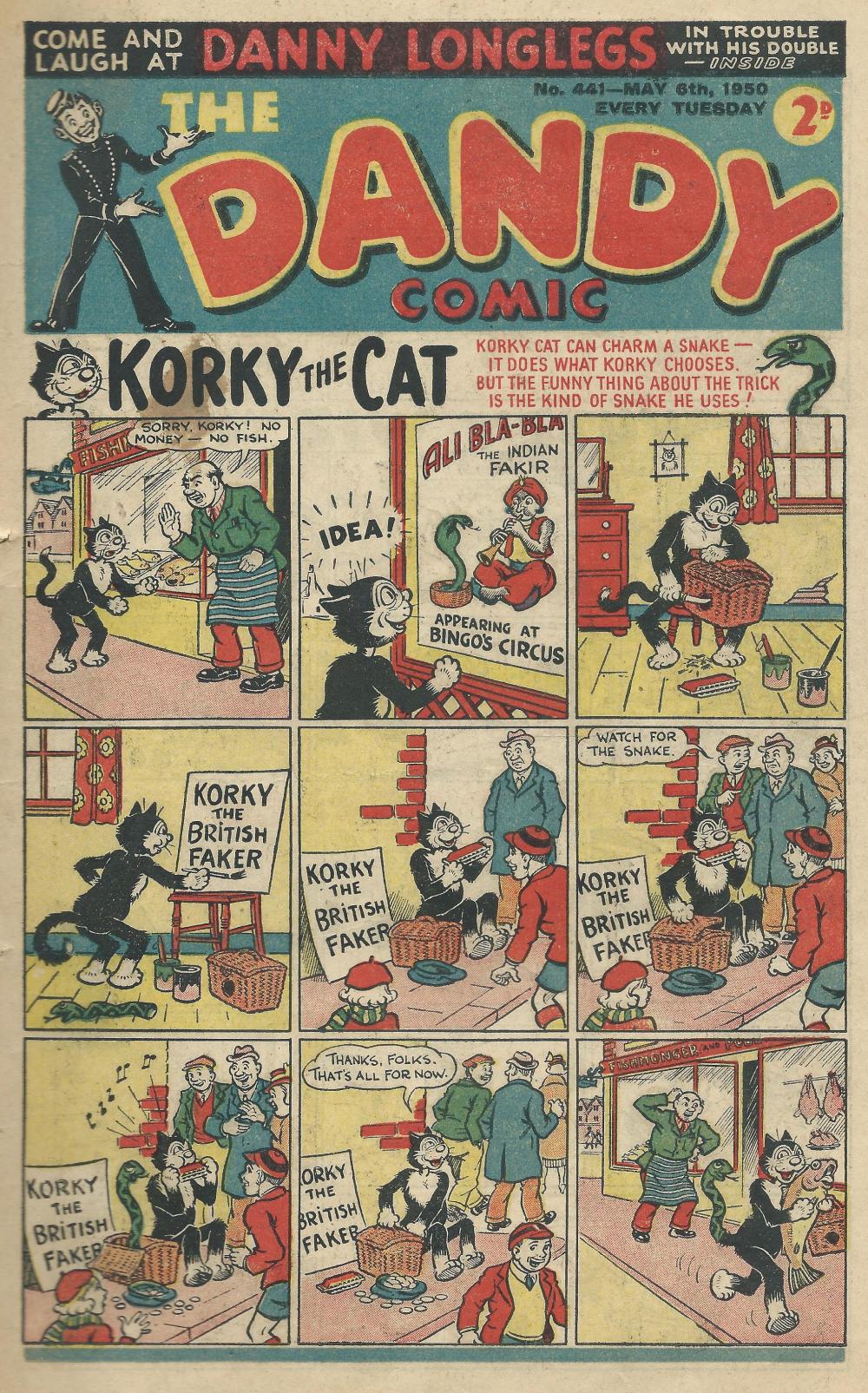 Pointing at the narrow margins of the cover of The Dandy Comic from May 6th 1950 that he was trying, rather successfully, to entice me with, the bookseller declared that the issue’s reduced dimensions were the result of post-war shortages. His certainly was such that I didn’t think to question a matter that I’d never considered before. If he said the comic’s pages were smaller than they might have otherwise been, then why would I ever doubt him? And if war and its aftermath could explain away the situation, well; wasn’t it fine to have a plausible solution offered up right on the heels of the mention of a previously-unrecognised mystery?

After all, in many ways, the comic really did seem a poor reduced orphan compared with The Dandy of later decades. Just twelve pages long, and with four of them mostly taken up by pot-boiling prose stories with the tiniest and least visually compelling of print, 1950’s Dandy offered but one side of full colour – James L. Crichton’s charming Korky The Cat cover – and four more marked by ugly red-spot colouring, the absence of which would actually have made the storytelling both clearer and more enticing. When first published in 1937, The Dandy Comic featured 28 pages, but wartime shortages had indeed whittled away at that until, in 1942, the twelve page format had arrived as a lasting standard. (The previous year had already seen the comic reduced to a bi-weekly, alternating its appearances with its brother publication The Beano.) To see an issue of the comic from eight years later makes it easy to regard 1950’s The Dandy Comic as an impoverished shade of the title rather than its ideal form, conspicuously packed with crowded storytelling in an attempt to deliver more child-pleasing content if not more pages. Its second crammed page alone hosts three strips – Freddy The Fearless Fly, Wuzzy Wiz and Hungry Horace – all stacked one above the other, 21 panels of straight-forward kid’s fare that would strain the eyes of anyone not in the fortunate possession of 20/20 vision. The evidence for austerity feels compelling. 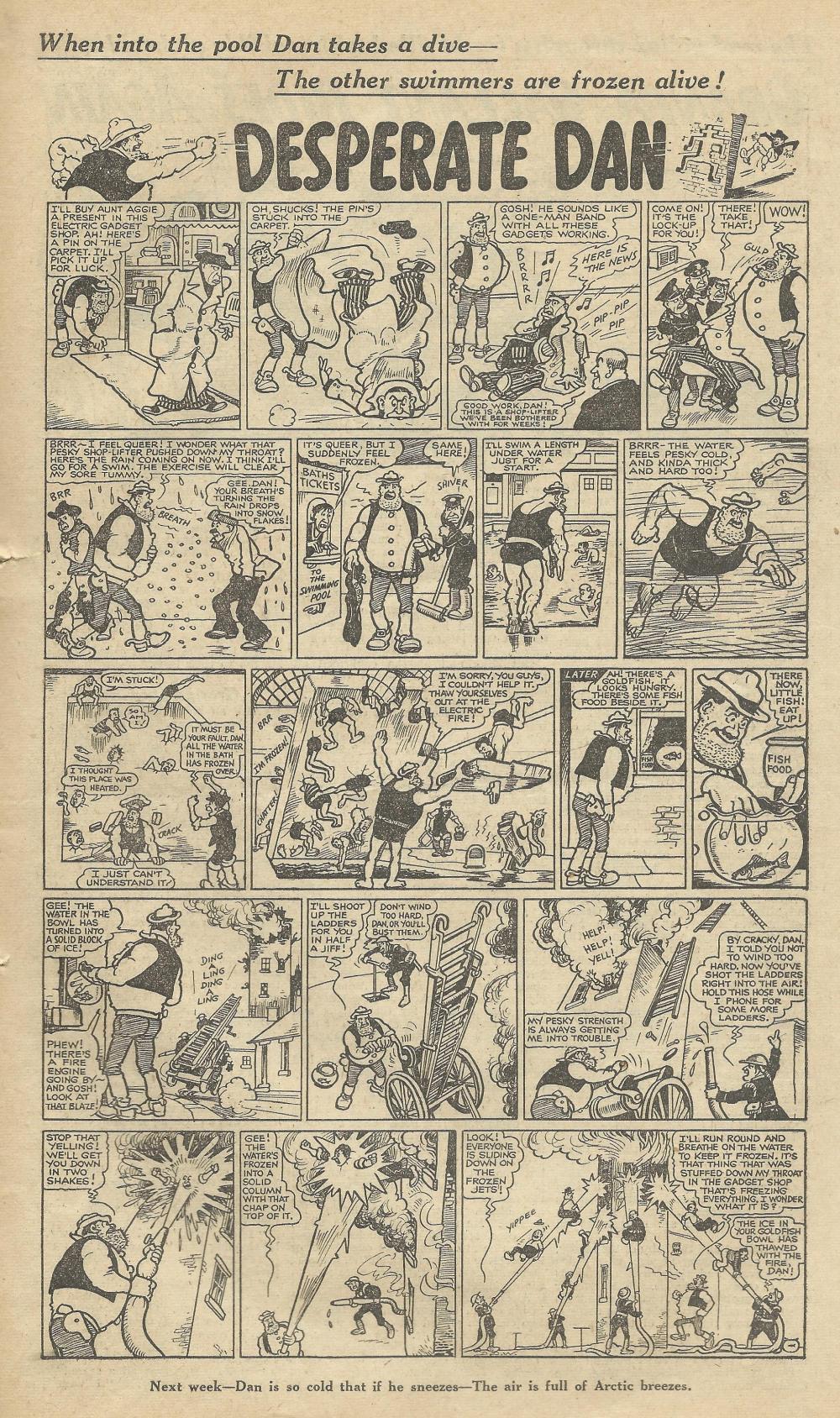 In the same issue, Dudley D. Watkins’ Desperate Dan strip might also suggest a publishing’s fiat to compensate for the thinness of the package by a density of product. The tale features six tiers, including its title, with 18 panels all jammed with character and events. As if he’d been told that this and no other strip would stand as his legacy, Watkins displays a fantastic range of conceits, effects and camera angles, embracing the depiction of a grandly imaginative story on a by-necessity constrained scale. The detail is amazing, the ambition, fully achieved, remarkable. Here, on a single panel barely measuring 6cm by 3cm, Watkins uses a longshot to show Dan holding a frozen swimming pool in the air while depicting 8 swimmers trapped in the ice. (See the scan below.) As if that wasn’t enough, the frame also contains a distressed boy trying to use a heater to melt off a broad skirt of ice while a scowling caretaker brings a hacksaw and a kettle to do whatever little he can. And in the background, Watkins adds a final touch to lend scale, namely, the swimming pool’s glass roof.  If this approach was a deliberate attempt to compensate for the unavoidable paucity of the comic’s size, then it was a remarkably diligent and inspired one. 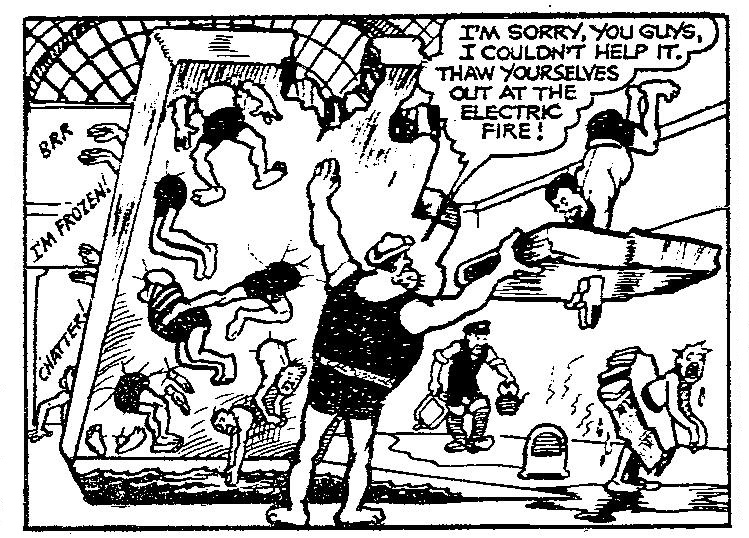 But in truth, Watkins’ work on Desperate Dan had always been this crowded. Once the strip had been promoted to a full page in The Dandy Comic in 1939, Dan’s adventures always featured such dense and rich storytelling. This was simply how Watkins had always done the job. (How he managed to do so, and to do so with such remarkable success, is impossible to imagine, given he was also illustrating the two pages and twelve panels of Daddy Longlegs in the same issue, along with several other strips for D.C. Thomson such as Jimmy And The Magic Patch and Lord Snooty in the The Beano, the Oor Wullie and The Broons strips in The Sunday Post and his various graphic adaptations of classic children’s novels. To be so consistently brilliant while also being unimaginably productive; it hardly bears thinking of. In terms of English language comics, it’s hard not to think that Watkins and Jack Kirby were, and perhaps still remain, well ahead of their fellow storytellers in terms of both brilliance and productivity.) To flick through the oversize reprint volume The Legend Of Desperate Dan is to experience how determined and ambitious Watkins had always been. Yes, the need to provide the maximum of enjoyment for a minimum of cost was, of course, always a prime consideration for the comics business of the age, and, indeed, of any age. The Dandy Comic had been launched in the Great Depression, after all, and its form and content were always shaped by market forces. But the density of Watkins’ storytelling in 1950 was clearly the continuation of pre-war calculations rather than the direct and sole consequence of post-war austerity. 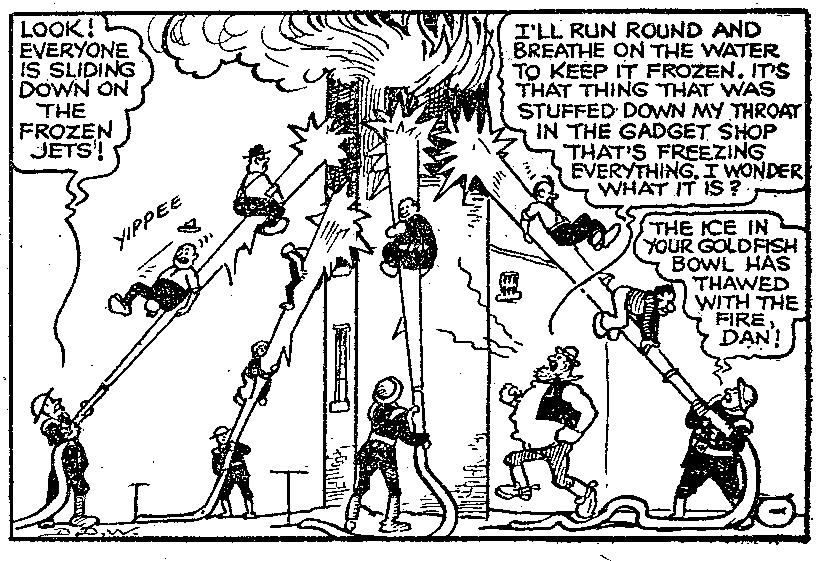 Even the suggestion that post-war paper shortages determined the margins of The Dandy Comic’s pages proves a questionable one. Paper rationing was actually brought to an end in 1946, which means that the decision to retain the wartime dimensions of the comic can’t be so simply explained. (Paper was, admittedly, still relatively expensive; The Daily Mirror newspaper at the turn of the 50s featured but 12 sides itself.) Perhaps the truth of it all, to a lesser or greater extent, relates to publisher D.C. Thomson’s engrained resistance to price-rises. (Remarkably, The Dandy wouldn’t increase in cost until 1960.) After all, the comic in 1950 was selling in immense numbers and, even at a mere 2 pennies a copy, must have been generating colossal profits. According to 2012’s The Art And History Of The Dandy, with its multiple authors, the comic hit its peak sales in the same year as my old copy appeared. The edition of April 22 1950, numbered 439, sold a gasp-inducing 2 035 210 copies, while the year as a whole saw 102 563 065 issues of The Dandy Comic sold. Even with the potential challenge to profit that the appearance of Eagle in 1950 appeared to pose, there can’t have seemed too many compelling reasons for changing the indisputable success story that was The Dandy Comic.

The inconvenient fact slays the superficially sturdy hypothesis, and the suggestion that the form and content of a 1950 copy of The Dandy Comic can be essentially explained with reference to post-war austerity proves as dubious as it initially felt compelling. But, just for a moment, it certainly felt like a completely convincing explanation. I can be shamefully credulous, and I really ought not to be, A reminder then, if nothing else, that the simplest and most seductive of explanations, as we find to our peril in this terrifying world of 2019, is rarely the correct one.

Them Darned Superpeople is back for October 2019, and a new post should arrive in the very near future, if not actually tomorrow. 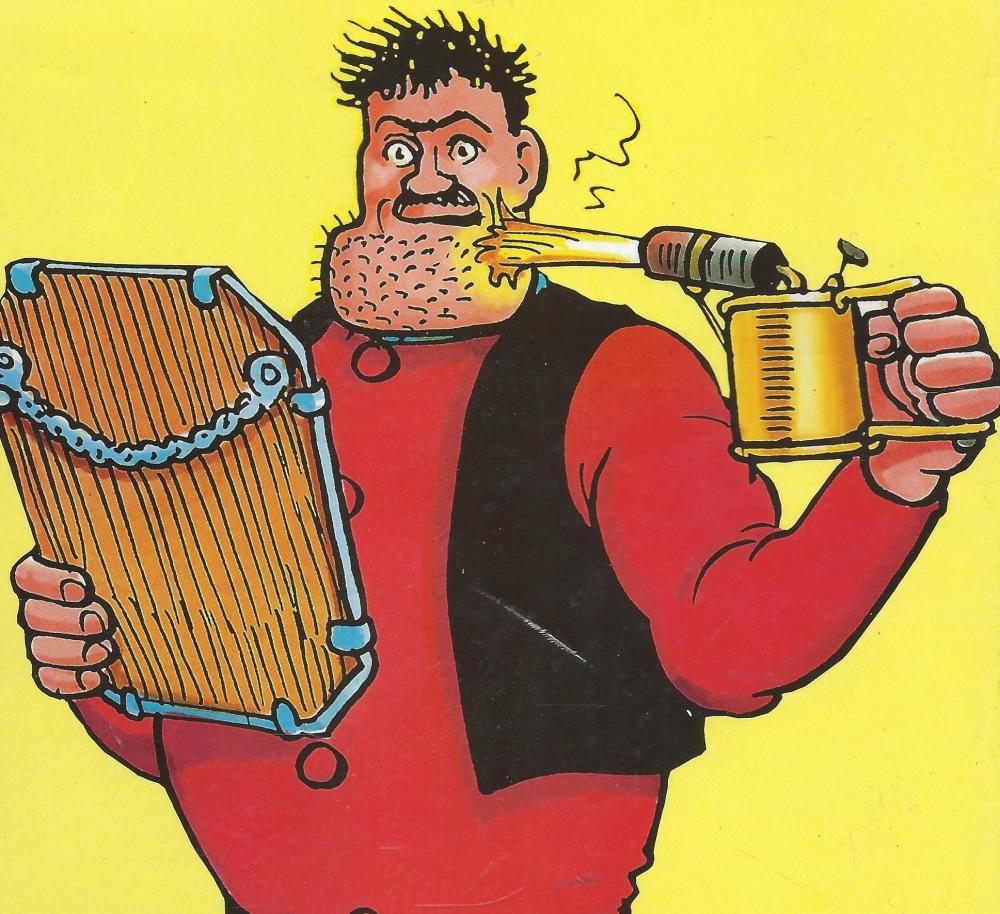