It’s common to hear that the storytelling of a particular period in action/adventure comics is all of one piece. ‘I don’t like the comics of today’, goes the lament, ‘but I still like the way that they used to be’. A few qualifiers might be added to explain the more obvious differences – country of origin, genre, company norms, the most idiosyncratic of creators, and so on – but the impression is still frequently given of common methods and shared ambitions. But even in the most apparently telling examples, a second glance reveals a wealth of different approaches and individual skill-sets. Take the example of 1978’s 2000 A.D. #50, which I just happened to come across again this past weekend. These early issues of the title are often compared with the comic’s more recent editions. Its first few years are characterised as being more action-packed, extreme, intense, uneven, inventive, adolescent, unselfconscious and liberatingly heedless. By comparison, the contents of the 21st century’s issues are considered to be marked by far greater degrees of sophistication and thoughtfulness.

In general, it’s a comparison that holds, but only to a degree. For the more the stories from any one period are considered, the more their differences become as obvious as their similarities. In that, the easy and sweeping generalisations become much harder to support. Such is a fortunate realisation for anyone who’s interested in taking the broad character of an age’s storytelling and recreating it, to this degree or that, today. The more diverse and subtly different the comics of the past can be seen to be, the more clues they offer up to the mysteries of their creation and success. To take but one example, in 1978’s 2000 A.D. #50, we’re faced with the work of seven different creative teams, including six different writers. If all seven tales seem bound by a common sensibility, it’s a similarity of kind that’s reached by seven differing approaches. As such, it’s a comic that can serve as a textbook of sorts, containing as it does a variety of separate, and sometimes quite distinct, approaches to a shared goal.

Take, for example, the untitled, cover-featured Dan Dare story from this issue. Anyone looking for insight as to how to create the sense of an exciting action-packed tale can note some perhaps surprisingly subtle strategies at work in writer Gerry Finley-Day and artist Dave Gibbons’ pages. As easy as it is to assume that ‘action-packed’ involves a constant, breathless parade of incident, this episode of Dan Dare reveals some admirably measured and quite obviously deliberate storytelling. To focus on the single example of the organisation of events on each page, it’s notable that each side’s first panel eschews action. Instead, each of the four sides features an opening panel that serves two functions. Firstly, the existing cliffhanger is largely resolved, meaning that the reader is rewarded for moving on from the bottom of each page. Secondly, a moment of calm – albeit it one still laced with considerable tension – is created, a breathing space to clarify events before charging on to another bout of conflict. In such a way, the story establishes, if you will, a groove that can capture the reader and propel them forwards without running the risk of a complete lack of variety.

And so, even on the cover – see scan above – there’s an establishing panel showing Dare and his crew recapping the facts of the previous issue’s cliffhanger. Note, it isn’t a scene characterised by any measure of visual intensity beyond the dialogue. It’s as if Finley-Day believed that readers couldn’t be expected to go from 0 to 90 without a moment of warming up. And then, with the scene set and the bridge between relative calm and full-on space operatic dust-up offered by the blue-coloured, jagged-edged dialogue bubble, we’re given an exceedingly effective, action-sodden battle. Interestingly, the story doesn’t just offer the spectacle of one set of spaceships firing on another. Rather, it frames that action in the confusion and concern of Dare himself, who’s unsure of what the newly arrived vehicles are fighting. Throughout these 4 pages, spectacular incidents are presented in the context of emotional responses. That in itself helps keep the story from becoming a quickly dulling procession of one darn explosion after another. 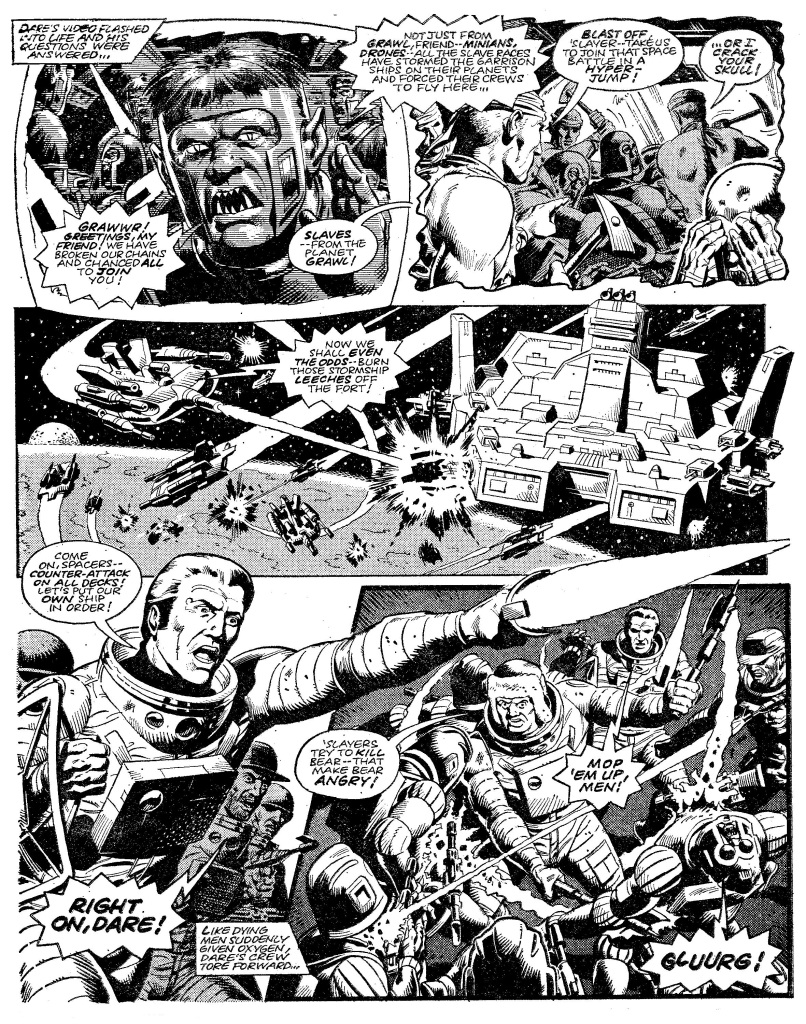 The same approach is true for the second page. The first panel is a moment of relative calm created from a mix of a resolution to the proceeding cliffhanger mixed with clues about how events will now progress. With a new playing field established, the story leaps off into a new set of conflicts. Switching between the battle in outer space to the hand-to-hand combat within Dare’s ship maintains the variety of violent invention, while the attempts by the Earthmen to defeat their oppressors sets up the side’s cliffhanger;  how is this clearly gruesome conflict going to proceed with victory seemingly secured?

With the kind of skillfully deliberate construction that action/adventure tales of the period are often considered lacking, the cliffhangers of pages 2 and 3 are much less intense than those of the cover and the final side. Again, Finley-Day and Gibbons are ensuring that their story escapes the sense of being a one-note indulgence. Different levels of intensity are, quite obviously, relevant to different stages of a single chapter, and that extends to the degree of hope that’s being transmitted to the reader. And so, in the scan above, the sense is clearly given that the fiends of the Starslayer Empire are facing a swift and, to the reader, satisfying defeat. In the one from page three as scanned in immediately below, that sense is intensified as the degree of personal combat is ramped up.

Forgive me for repeating myself, but this is a blog entry about the skillful use of repetition in story-design. Again, the first panel of the thrid page resolves the pressing cliffhanger from the preceeding side. The battle begun on the previous page has been won, and, it’s worth noting, won without any unnecessary padding. (To be entertainly  ‘action-packed’ is not necessarily to present an endless, lazy parade of fight sequences. This, I can’t help but believe, is a common mistake to be seen at work in many of today’s superhero tales.) Now that the chapter is three-quarters through, we’re shown the two allies – Earthmen and alien slaves – combining to defeat their common enemy. This serves as a false ending of sorts, a satisfying conclusion, or so it seems, to the story’s most pressing concerns. But, of course, it’s a set-up for the final side, in which the reader’s feelings will be cunningly wrenched downwards from exhilaration to despair. 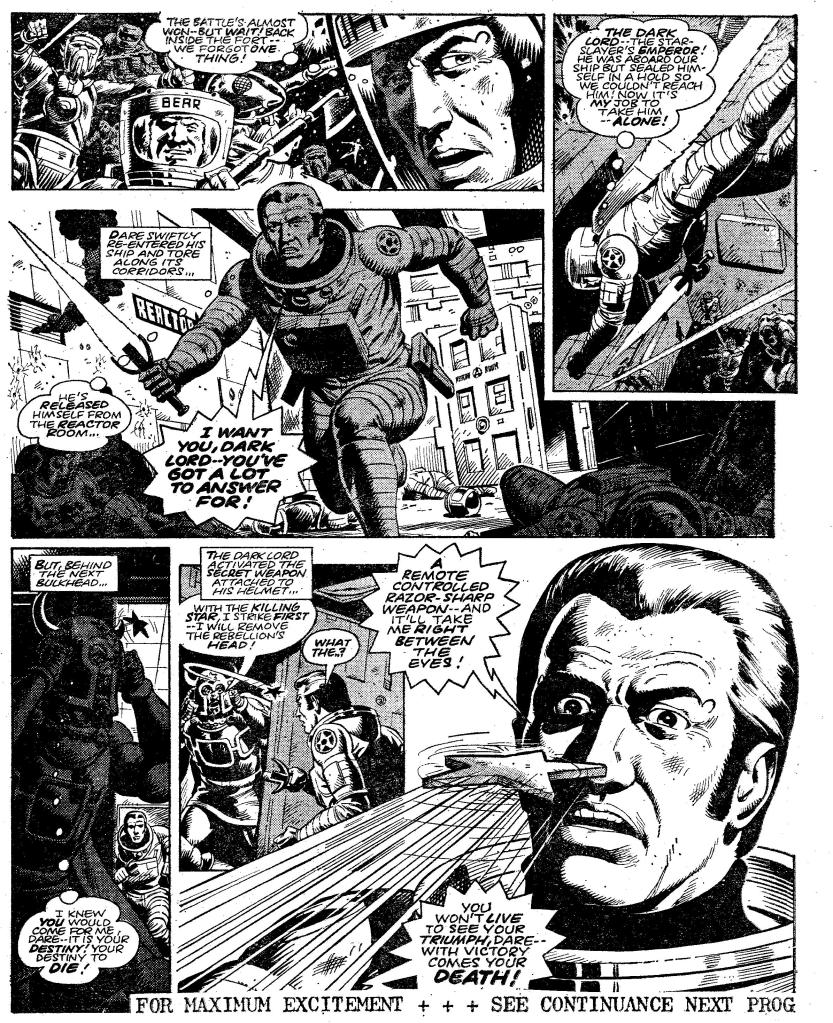 In the fourth and final page, there’s a slight modification of the first panel’s contents  when compared to before. Yes, the conflict on the previous side is shown to be resolved, but here, pace begins to gather for the chapter’s closing cliffhanger with a touch of action. Rather than allowing the victory to stand without qualification in the first frame, Dare is shown recognising that ‘one thing’ has been forgotten. Now the narrative shifts from massed battles and forces in several locales to a single scene and two opponents. A sense of urgency being of the essence, Gibbons now offers us panels that insist we imagine, rather than simply being shown, the details of what follows. And so, unlike the previous sides, in which the action in one panel flows seamlessly and obviously into its following frame, here the continuity between panels is left far more to the reader’s imagination. And so, we’re shown Dare flying towards an airlock, but we don’t see him opening it. Then, we see Dare inside the ship and racing after the Dark Lord without his helmet, which, having already been removed, lies on the floor behind him. The result is a sense that time has speeded up to the degree that we haven’t even been able to catch sight of certain key events. Matters are clearly reaching an inescapable and fearsome climax.

And then, as both the structure of both serial fiction and the preceding pages of this chapter insist, we’re offered the most substantial cliffhanger of these four pages. Well, of course we are, given that this page’s final scene has to bring the reader anxiously back to the story in a week’s time. As with the cover, Finley-Day and Gibbons use doom-ladened dialogue in jagged-edged balloons to ramp up the intensity. Those looking for naturalism in action/adventure strips will quail at the sight of Dare describing in some detail the danger that’s hurtling towards him, but, for all that there couldn’t be time for such words, it’s a choice on Finley-Day and Gibbons’ part that makes the threat both more immediate and more intense.

Graphs and charts could be prepared to show how Finley-Day and Gibbons used a series of purposeful variations within a single repetitive design here to manipulate the reader’s involvement in their tale. And they could also be prepared to illustrate the differing ways in which other teams in 2000 A.D. #50 worked to achieve the same ends. For nobody else here writes to the same format as Finley-Day did on both Dan Dare and, later in the same issue, Invasion!. Instead, each team pursues their own individual approaches. Which means, to those wondering how the virtues of the period’s stories might be adapted to present-day stories, that one single comic from 40 years ago contains a whole host of different and yet complimentary storytelling techniques. The craft is there, as it is in what feels like countless old comics, awaiting the attention of each new generation of creators.