In which the blogger comes clean about his recent reading. Warning: spoilers will be spoiled, opinions will be expressed.

In the summer 2018 edition of SFX, actor John C McGinley – who’ll forever be the splendidly fearsome Dr Cox from Scrubs to me – discusses his boyhood love of Marvel Comics;

“I just thought (‘Spider-Man and The Hulk’) were badasses. But there was nothing in the Spider-Man comics that was like where I grew up in New York. They were different universes. They had bright colours – we had mostly grey.”

I recall thinking much the same about New York when I visited it in the summer of 1982. It was mostly nothing like the city I’d read about, or thought I’d read about, in the thousands of Marvel stories I’d obsessively wolfed down since the mid-60s. Having swallowed as a boy the line that The House Of Ideas’ comics were characterised by their realism, reality itself came as something of a shock. In truth, New York was endlessly more diverse and fantastic than I’d ever seen portrayed in the comics. (Oddly enough, in the light of McGinley’s comments, it was Ross Andru’s portrayal of NYC in his 70s Amazing Spider-Man issues that seemed to prepare me as a stranger the most. I’d later read of Andru trekking out into the city with camera and sketchbook to capture its details.) Of course, the superhero comic wasn’t ever intended as a vehicle for reportage, and some of the very finest work in the genre – we needn’t look beyond that of Kirby and Ditko – created their own vibrant, idiosyncratic versions of New York that were, for all their relative lack of realism, utterly convincing and intrinsically thrilling. Theirs was a rare skill that few, now as then, can even begin to challenge. In the absence of either an eye to the reality of New York or the capacity to create a compelling stylistic alternative, many have produced tiresomely generic stage-sets that do little in themselves to beguile the reader.

Whether more or less realistic, the importance of setting to an action/adventure comicbook’s success is surely self-evident. Yet it’s hard not to believe that the importance of the world in which action occurs on the page is still frequently underestimated. How often are we given next-to-no information about, say, the weather? It’s a carelessness that can wither away the appeal of otherwise serviceable portrayals of the world. In ignoring the likes of the weather, storytellers sacrifice its potential to make their settings more fascinating and dramatically involving. It’s as true for passing moments as it is for grand, concluding set-tos. In the right hands, the weather becomes a player in its own right as well as a way of adding depth and colour. After all, isn’t it true that many of the stories that resonate most strongly use the weather not just as a backdrop, but as an intrinsic component of the story itself? Start to list such comics and its hard to stop: the winter downpours and nighttime summer heatwaves in Eisner’s The Spirit, a wonderful example of which is at the top of this page. The parching deserts of Giraud’s Blueberry. The icebound mountains of Herge’s Tintin In Tibet. Medieval Europe’s sodden, danger-filled countryside in Herman’s The Towers Of Bois-Maury. The oncoming storm in Englehart and Roger’s first, great Joker tale.

On and on goes the list. I’ll stop here, least I go on for what could be forever. 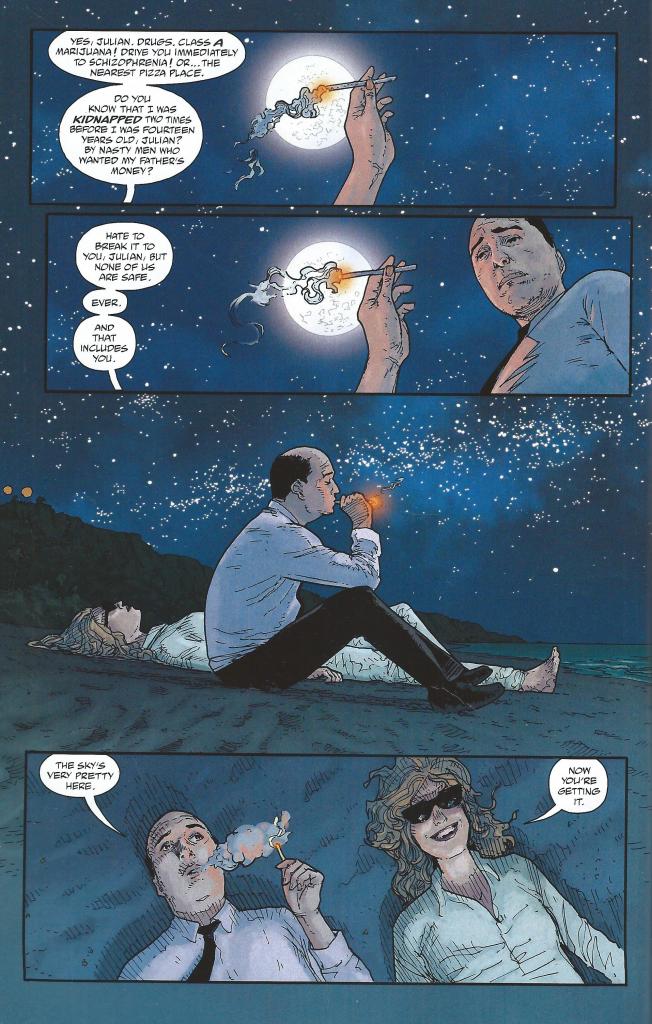 It’s not that the weather has to be portrayed with fetishistic detail. Skillfully used, a few broad strokes can work wonders. In Williams, Dowling, Winter and Robins’ Unfollow #4, we’re given a quiet page set on the beach of an island in the Bahamas at night. Two characters whose lives have been utterly transformed, and who would otherwise never have met, share a spliff on the sand under a huge, crystal clear night sky. Clearly the hour is, at the very least, comfortably warm, with the characters being down to their shirt sleeves. Beneath this ranging canopy of stars, the promise of a previously unimaginable future matched to the anxiety of new opportunities is effectively intensified. Even in the details, the setting is used to suggest details about the character’s personalities. The sweetly by-the-book Julian with just his top button undone. Courtney, the hedonist’s hedonist, wearing sunglasses at night to stare at the stars.

Lose the stars and the evening and the summer heat and this is just a conversation. It would still have the potential to be a touching one, but, in its own necessarily quiet way, it wouldn’t have the visual and emotional appeal that this does.  In truth, this of all of pages in Unfollow volume 1 pages stayed with me after I’d finished the collection. It had a beauty and depth that resonated to a degree that far more spectacular and action-packed sequences couldn’t hope to match. 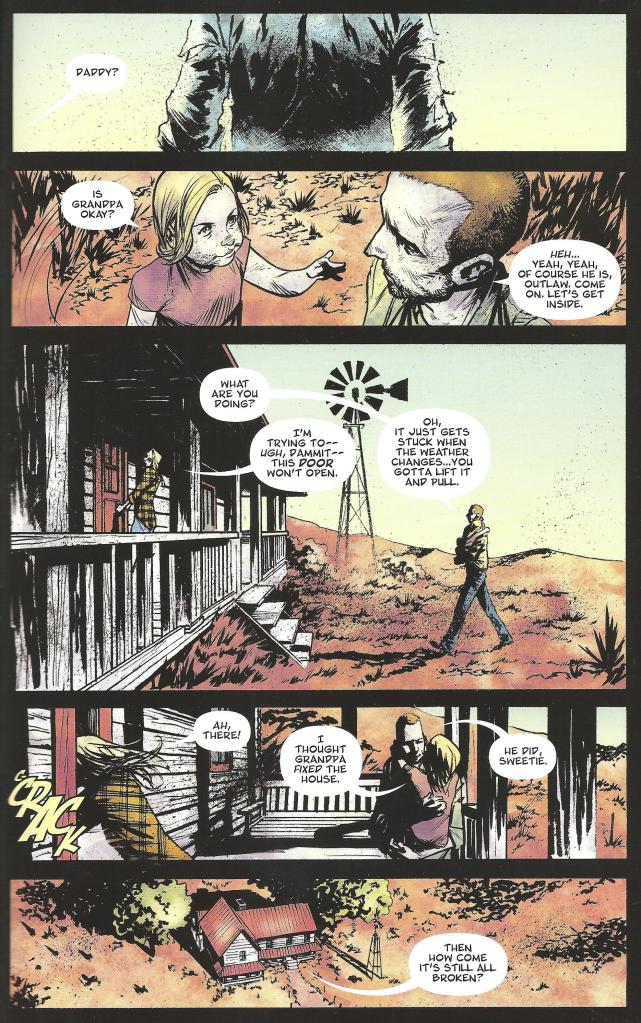 There’s a dissertation or three to be written about the ways in which Cates, Shaw, Wordie and Hill put the weather to use in God Country’s West Texas setting. It’s tempting to share a page from the story’s opening chapter, with its utterly convincing depiction of an ever-escalating stormfront as it relentlessly encroaches upon an isolated township. But it’s a far, far less spectacular example of the use of setting and weather that ended up sticking in my mind. Perhaps because I’ve found myself living in a worryingly fragile, jerrybuilt home out on the edge of the countryside, which I never ever imagined I would, I’m struck by the detail of the stuck door in grandfather Quinlan’s house. A brief moment in an epic tale, its mention tells us a great deal about the world we’ve been immersed in. It speaks of the nature of the home, and the land, and the climate, and, most of all, of an aged man whose ideal world is an idiosyncratically imperfect one. As if that wasn’t enough, it’s also foreshadows a sad truth about old Quinlan’s apparently miraculous recovery from dementia. I’m not always a subscriber to the less-is-more school of comics writing, but when discipline is matched to skill and purpose as here, I can only applaud with admiration. 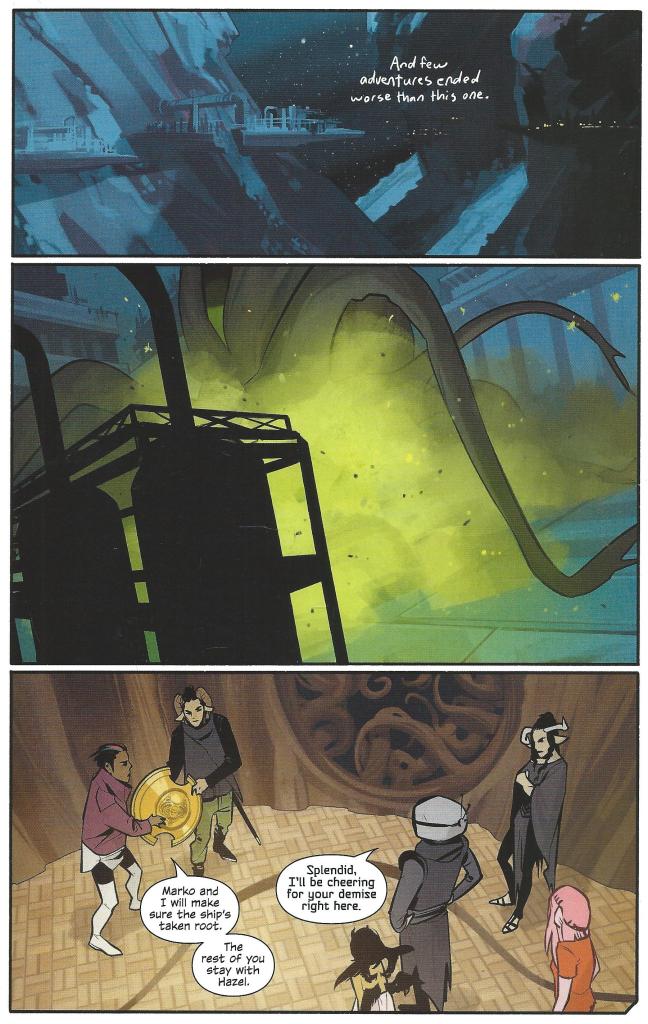 If only Staples and Vaughan’s Saga radiated a similar degree of convincingness. It feels churlish to criticise a comic that’s consistently featured such exemplary storytelling, and yet, over time, I’ve found it harder and harder to buy into Saga’s characteristic hybrid of science fiction and fantasy. Part of that lies in the diffusion of momentum that’s accompanied the ballooning of the comic’s cast and the accompanying absence of a single, driving narrative. But it’s also matter of setting. With each subsequent collected volume, I find it harder to grasp what the worlds of Saga would be like to experience on an everyday basis. Without that essential verisimilitude, the characterisation and action in the story’s forefront seems disorientatingly mannered and ungrounded.

Most of this collection takes place on the war-wracked comet, Phrang. It’s a setting that we’re given a sprinkling of information about. The problem is, the detail that’s shown is never effectively integrated into a single picture of an alien world. Snapshots of life before and after civil collapse following endless warfare abound, but how to mix what we’re given – in truth, there’s far too little of it – into a convincing whole? Working out what Phrang was like before its current travails is a baffling business. Only once are we given an establishing shot that clearly helps us grasp how life was and is lived there, as you can see at the head of the page above. There we’re shown industrial installations and cities built on either platforms or rocky outcrops on the Comet’s surface. But how that fits with the panels which show what appear to be lakes on Phrang is never explained. Jump to the present day and making sense of the war-torn ruins is similarly trying. In essence, Phrang is a dark, ruined city that lacks character or interest. The details of life there are largely left to our imagination, which is a fantastically effective strategy if the story’s been helpfully seeded with facts and hints. But we’re not even given a sense of scale against which to track the journeys made by various cast members. They could have been travelling for days or popping around the corner. Truth is, Phrang is a dull, dull place to spend any time on. Which, as a challenge to be faced by our cast, makes for a potentially interesting set-up. But that doesn’t mean that Phrang should be a flat, uninteresting place for the reader to spend time in. By the end of 6 chapters set on the comet, I wasn’t even interested in who did and didn’t escape it. The problem was, I simply didn’t believe in the reality of what I was being asked to believe in

In essence, the sense of a believable, coherent universe in the pages of Saga volume 7 quickly bleeds away, and to the degree that the comic feels far closer to an academic exercise than a beguiling epic. As such, the death of a longstanding and sympathetic cast member feels less like a heart-wrenching tragedy and more like just another in a tapestry of plot points. Event follows event, and yet, despite all the skill and heart on show, it all feels fundamentally bloodless and essentially unreal.

Them Darned Superheroes will soon return.

3 thoughts on “About The Weather: On Unfollow, God Country & Saga.”